Highlights from ECTRIMS in Amsterdam 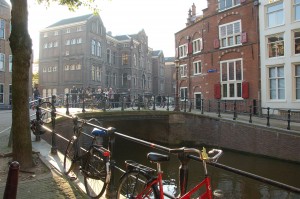 October 19-22 was the international multiple sclerosis meeting called ECTRIMS.  Over 7700 people including neurologists from around the globe convened at this meeting.  Many clinical trials were presented on new therapies with positive results.   Here are few of the meeting highlights:

BG-12, a new oral experimental medication for MS,  in the DEFINE trial reduced relapses 53% when taken twice a day and 48% when taken three times a day.  Those relapsing remitting MS patients treated with BG-12 were 38% less likely to have worsening disability while BG-12 three times a day reduced this risk by 34%.   BG-12 was also very effective in reducing MRI activity.  Some risks and side effects are flushing, nausea, diarrhea, low white blood counts, and high liver blood tests.

Neuromyelitis optica (NMO or Devic’s) is condition similar to MS in which an antibody attacks a water channel on the surface of cells called astrocytes.  This channel or “aquaporin”  is like a gate which lets water in and out of the surface of a cell.  In NMO, antibodies start attacking these channels.   The result is an immune attack against the optic nerves (nerves to the eyes) and spinal cord as well as sometimes the brain.  Although rituximab and azothioprine are often used,  no specific therapy is FDA-approved for the treatment of NMO .   Dr. Jeffrey Bennett presented work being done on animal models to develop a specific antibody therapy called Aquaporumab to help treat this condition.

Daclizumab, an antibody treatment given as an injection under the skin, was studied in 600 MS patients over 1 year.  The low dose reduced relpases by 54% and reduced the likelihood of worsening disability by 57% compared to placebo injections.  Some risks of treatment were skin reactions, elevation liver blood tests and serious infections, including one death beginning as a muscle infection.

Alemtuzumab annual infusions in the vein reduced new attacks by 55% compared to those patients on Rebif.  Only 8% alemtuzumab and 11% on  Rebif progressed over the 2 year trial in patients who never were treated with MS medications prior to the trial.  Some treatments risks for alemtuzumab were serious infections, thyroid problems and low platelet counts.

Dr. Barry Singer presented the one-year safety update on Gilenya after being approved one year ago by the FDA.  Over 20,000 MS patients have been treated with Gilenya globally.  Although Gilenya has known risks including slow heart rate with the first dose and swelling in the back of the eye (macular edema),   no new safety problems were reported including no cases of PML (a type of viral brain infection).